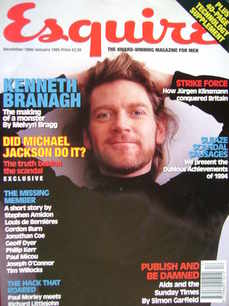 KENNETH BRANAGH - He's one of the greatest actors of his age. He's taken Shakespeare to the masses. And now he's directed Frankenstein... So why isn't he Britain's favourite son? Melvyn Bragg meets Kenneth Branagh

MICHAEL JACKSON - If you believe the world's media Michael Jackson is a monster who molests young boys and then cynically buys off his accusers with a $20 million pay-off. But the case for Jackson's innocence has never been heard. For the first time we reveal the untold story of the events that nearly destroyed a superstar

JURGEN KLINSMANN - This summer Tottenham Hotspur pulled off the transfer coup of the close season, and Jurgen Klinsmann, the most hated playerin the World Cup, was on his way to White Hart Lane. Since then his image has undergone a remarkable transformation. Laura Thompson meets a footballer unlike any other

BARRY HEARN, the self-appointed king of the sports impresarios, built an empire on the back of Steve Davis's success. Now he wants to add Britain's top footballers to his stable of boxers and snooker players. Andrew Davidson meets the promoter who only sees up-sides