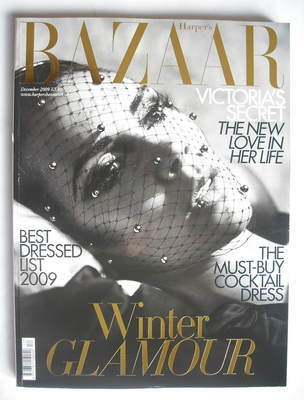 VICTORIA BECKHAM
Few people anticipated the extent of Victoria Beckham's hidden design talent - but her collections have won over critics and top designers alike. In an exclusive shoot, fashion's new star plays the noir heroine caught in sultry reverie, and reveals the key to her remarkable success
16 pages with great photos

MAN OF THE MOMENT - Richard Young's magical ability to capture the essence of a good time on camera has for decades earned him unfettered access to the world's most glamorous gatherings. As a new exhibition of his images goes on display, he talks to us about bringing Jennifer Aniston out of her shell, snapping Elizabeth Taylor mid-clinch, and the joy of the uninhibited A-lister
6 pages
Features black/white photo of:
- Kate Moss and Jo Wood (at Ronnie's 50th birthday)
- Jerry Hall and Mick Jagger (leaving San Lorenzo restaurant, 1987)
- Marie Helvin (1981)
- Andy Warhol, Bianca Jagger and Rupert Everett (at the after-party of a Warhol exhibition, 1981)
- Elizabeth Taylor and Richard Burton (kissing at Burton's 50th birthday party, 1975)
- Ringo Starr, Elton John and George Harrison (Prince's Trust concert, 1987)

Plus fashion, beauty and lots more