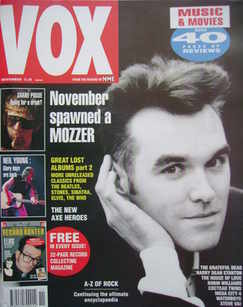 Good condition - carefully read once - some light wear to cover

SHANE MACGOWAN has not been a happy man since the 'natural living' days of punk. Now he's disillusioned with The Pogues and a recent medical diagnosis gave him two years to live if he didn't stop drinking. We talk to the man who called himself O'Hooligan

3 and a half pages

THE WATERBOYS - Mike Scott talks you through the new LP

NEIL YOUNG is back with a cracking new album and plans for a 180-track compilation. Nick Kent caught up with him in Paris

THE HOUSE OF LOVE became a house of ill repute as they binged, boozed and vindalooed their way through the tour-that-never-ended, burning off not one, but two leading axemen. Guy Chadwick sobers up to tell Max Bell about the bits he can remember

MORRISSEY on his sudden American success, his ne 'Bona Drag' LP, and the ungrateful British public...

Plus album reviews and more!