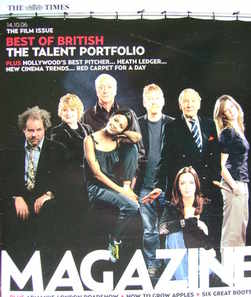 TOMMY STEELE - "I didn't get where I am today without..."

He fell into acting at school and was quickly cast by Hollywood as the classic leading man. Now 27, Heath Ledger talks to us about breaking the mould and life after Brokeback

Three and a half pages

THE BRIT PACK - We salute a new British empire

GIORGIO ARMANI - When Giorgio Armani decided to show his Emporio line at London Fashion Week, big things were expected. The Italian maestro did not disappoint, embarking on a whirlwind tour of the city, and throwing one of the capital's glitziest-ever parties. We had exclusive access to the Giorgio roadshow