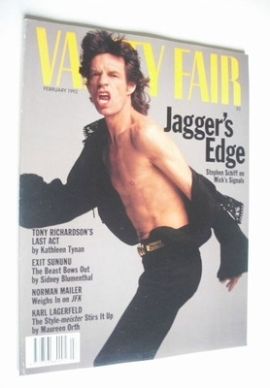 NORA EPHRON - 7 and a half pages

KARL LAGERFELD - Karl is couture's undisputed philosopher prince. He saved Chanel and made it the most sought-after line in the world, revived Chloe and Fendi, and launched his own KL. But has his personal loss changed the meaning of success?

TONY RICHARDSON - Director Tony Richardson was the wizard who transformed the English stage and screen and presided over a theatrical clan that included his ex-wife Vanessa Redgrave, with whom he was planning a return to the West End. As we report, Richardson faced his death from AIDS last November with the same style and wit that graced his finest work

LYNDA CARTER has been working overtime to clear her husband, Robert Altman, in the B.C.C.I. mess. But even Wonder Woman might not be able to save him now