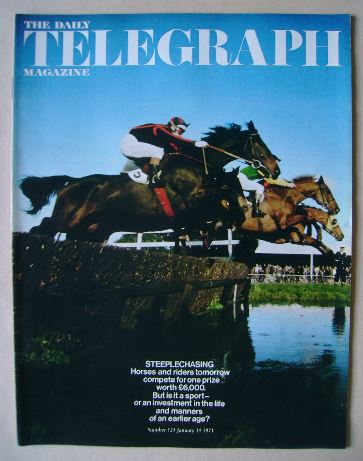 DREAM CAVES IN THE COUNTRY - Even in urbane France the supply of weekend houses of character is outstripped by the imaginative demands of countrylovers. But in France, Beata Levy discovered, families fall in love with caves
Two and a half pages

DO WE NEED SMALL CLAIMS COURTS? - Many people in Britain, most actively the Consumer Council, have urged that we follow the American lead and establish small claims courts, where disputes involving relatively modest sums can be settled informally without expensive lawyers. Here we publish the stories of four people whom the present system has failed, and Ian Ball looks at the working of the under-$300 court in New York. Featuring Mrs Mary McKie, Mrs Georgina Earnshaw Smith, Graham Hall, Giuseppe Giarraputo
Four and a quarter pages

EVER SEEN A JOCKEY LAUGH? - Cheltenham, Newbury, Doncaster, Ayr, Haydock Park and Sandown Park - at each of these race courses the world of before the First World War survives in the members' enclosure. There is a timelessness, and a comfortable sense of security. Everyone in National Hunt Racing has his role to play, and each - owner, trainer or jockey - accepts it. Nik Cohn found this as he followed the heats of the Wills Premier Novice Chase, whose final, worth £6,000, is to be run tomorrow
Four and a half pages

AIR BAGS: WILL THEY WORK? - Self-inflating pillows, intended to cushion the impact of a car crash, may become compulsory in the US and are being discussed here. Are they the answer to the problem of road deaths? Some British manufacturers are sceptical. Doubts were intensified by the first full-scale test in Britain. Courtenay Edwards was there
Two and a half pages