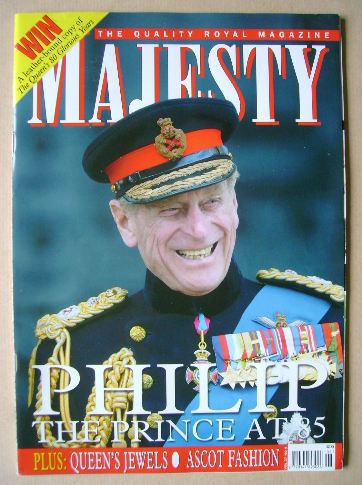 THE FIRM FAVOURITE - Despite keeping a low public profile, the Duchess of Gloucester is a popular member of the House of Windsor, and this month celebrates her 60th birthday. Coryne Hall looks back over her royal life
6 pages

MY FAIR LADIES - On 20 June the Queen will officially reopen Ascot racecourse following its £200 million redevelopment. As the Royal Meeting returns to its Berkshire home, Ingrid Seward looks at how the fashions with which it has become synonymous have evolved over the years
7 pages

THE QUEEN'S JEWELS - In the first part of a series on Her Majesty's personal jewellery collection, Joe Little looks at a few of the pieces that are to go on display at Buckingham Palace next month as part of the celebrations for her 80th birthday
5 pages

PRINCE PHILIP - As the Duke of Edinburgh approaches his 85th birthday he has lost none of his power to provoke strong reactions in his wife's subjects. He remains an enigmatic, forceful and often contradictory character, qualities deriving directly from his far from idyllic childhood and lifelong battle to establish a distinctive role for himself
8 pages

THE CASTLE AND GARDENS OF MEY - Recognised by people the world over as a jewel in the historic landscape of northernmost Scotland, the late Queen Mother's much-loved home is once again in the news as its trustees launch a two-tier 'Friends' scheme
4 pages