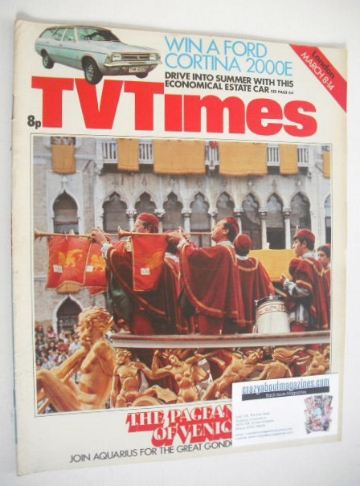 Good unread condition - there is some light cover wear

DON'T EXPECT GALLANTRY FROM THESE GONDOLIERS
Venice, perhaps the most romantic of Italian cities, is dying. But its annual Gondola Race - the subject of this week's Aquarius - lives on. For Humphrey Burton, the film is a farewell to the programme he founded. Perhaps it is also a farewell to the beautiful city itself
Three and a half pages

HOW THE EAST WAS WON... by Fred Scuttle, Ernie the milkman, and Benny Hill
One and a half page feature

JAMES BOOTH - Talks of his hopes for the future
2 pages

LESTER PIGGOTT - "The other face of the legend they call Piggott" (Part 2)
(by Brough Scott)
The Fifties saw Lester Piggott fulfilling his early promise and by 1960 he was being acclaimed another Gordon Richards. But the successes that were to follow would stamp Piggott the greatest jocket of all time
3 page feature
(article continues in next week's issue)