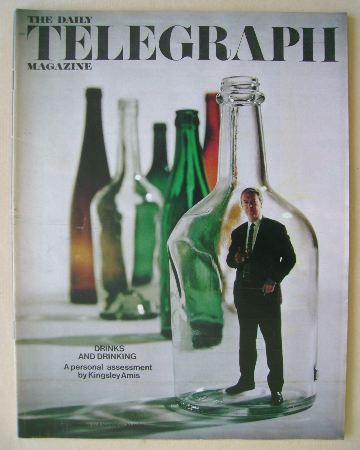 ADVENTURES FOR DULL DAYS - In an ugly, untidy part of Bristol Bel Mooney found an uglier, untidier patch of ground. It is the Ashfield Place Adventure Playground. The grass may not grow there; but children develop
Two and a half pages

DOMESTIC TOY OR MONSTER MEDIUM? - Television is an immensely important part of our conversation and lives. Its influence enormous: but does the responsibility match it? To help assess the value of our own programmes, we asked Kenneth Adam, former head of BBC TV, to look critically at television in some of the 129 countries with TV - who controls it abroad, its "personalities", its freedom. This is his report
Four and three-quarter pages

THE AMIS DRINKER'S COMPANION - Alcohol, conversation and humour are all connected in a profoundly human and peculiarly intimate way, says writer Kingsley Amis. In the first of a three-part series, he presents his personal view of drinks and the drinking scene
2 pages

PERIODS OF ARCHITECTURE: PERPENDICULAR - By this time, from the late 14th century on, technical achievement had reached its height of ingenuity: thrust was met by counterthrust, and wall was replaced by window. It is a style associated with rich laymen, and wealth won from wool. John Betjeman continues his account of British architecture
Five and three-quarter pages

THE MUD AND THUNDER OF RALLYCROSS - Rallycross - a car rally "special stage" condensed into a small area - is barely three years old, but is fully established as a thrilling and testing branch of motor sport. Today, John Sandilands introduces the Magazine's Rallycross car, which will be competing this season, and its driver
2 pages