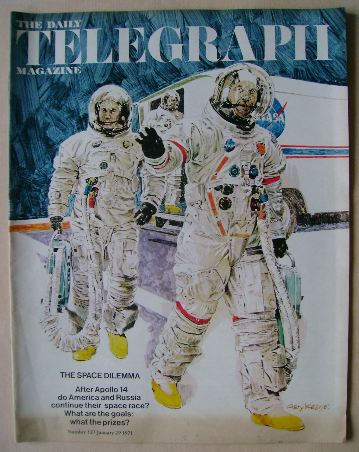 ARMS - AND THE MAN - Samuel Cummings is the biggest private arms dealer in the world. To him, conflict can mean big profits, and he could equip 40 army divisions. His customers range from amateur marksmen to armies
Two and a quarter pages

APOTHEOSIS OF THE 17 APOLLOS - Apollo 14 will be blasting off from an Earth already much changed by space science. What discoveries have been brought back from space so far; and is it worth the astronomical cost of pursuing more?
Four and a quarter pages

WHICKER'S PRIVATE WORLD - Alan Whicker: television's man of the world, man for all airports. Glamorous, gregarious, studiously non-intellectual. But who is he and why should he succeed where others fail?
Three and a quarter pages

SAILING WITHOUT WATER - Gybing, tacking, capsizing: dinghy helmsmen can now teach themselves these things in a shed - on a sailing simulator perfected after seven years by inventor Bruce Duval
One and a quarter pages