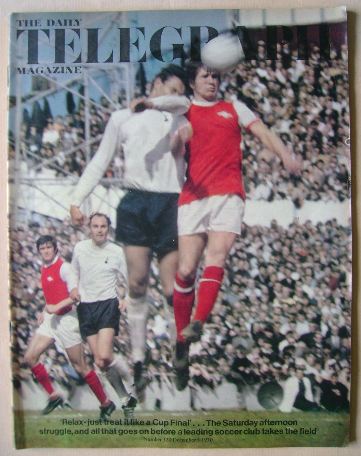 THE EDGE OF A SMALL WORLD - Only half a spin of this world on its axis and an accident of birth separate us from others living in the back of a Peruvian beyond. Gitta Sereny begins a journey to discover what hopes and fears our disparate lives have in common
6 pages

THE LONELY MAN WHO MADE CALLAN - James Mitchell, novelist and thriller writer, created Callan, television's ruthless secret agent. What are the problems of writing for TV? Does Callan resemble his creator?
Two and three-quarter pages

PRELUDE TO A NINETY-MINUTE WONDER - How does a famous soccer team train its players? How does a football star fall from grace? What goes on behind the scenes before 50,000 fans fill a stadium? Patrick Marnham watched Arsenal, holders of the European Fairs Cup, prepare for their first major trophy win for 17 years
8 pages

GOD HAD LED ME THERE - Almost 30 years ago a Dutchman, Hendrik van Loon, wrote his account, "Van Loon's Lives", of a series of imaginary dinner parties given for historical characters. We asked four writers to extend a similar invitation into the past. The first, James Cameron, shared a simple Scottish supper with David Livingstone
Three and a quarter pages

THE POSTCARD: INSTANT COMMUNICATION AND LASTING ART - The messages on the back of old postcards have lost any urgency they ever had. But the pictures on the front have acquired their own standing, and a sociological significance. On Monday a centenary exhibition of the picture postcard opens at the Victoria and Albert Museum. Edwin Mullins looks at the art that was sold by stationers and bought by millions
Two and three-quarter pages