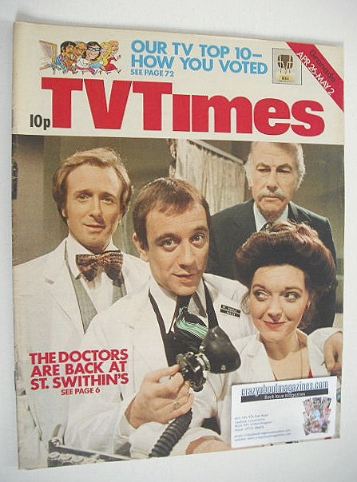 TIMOTHY WEST - "The other royal family, Timothy West and Dad"
Timothy West plays Edward the Seventh on Tuesday. It's a double for the West family, Lockwood, his father, played the role in an episode of Upstairs, Downstairs
Three and a half pages (includes large colour photo of Timothy with Prunella Scales and sons Sam and Joe)

ROSEMARY LEACH - "Mating? That's strictly for the birds" says Rosemary
One and a half pages

THE FINAL DAYS OF HITLER'S HENCHMEN - Even Hitler's death is disputed. But what of his henchmen?
One and a half page feature

LESTER PIGGOTT - "Lester rides to lay a classic ghost"
Here, Lester Piggott talks about the first Classics of the season, the 1,000 Guineas on Thursday, and the 2,000 Guineas the following Saturday
One and a half pages

IAN BANNEN - "I'd like an Oscar... for a doorstop"
One and a half pages