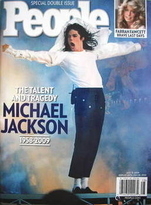 GROWING UP JACKSON - What's next for the kids?
3 pages
(further feature below)

MAN IN THE MIRROR - Haunted since childhood by insecurities about this appearance, Michael Jackson turned to plastic surgery
2 page photo feature
(further feature below)

FROM SMALLTOWN TO MOTOWN - Led by the angelic-voiced Michael, the Jackson 5 reached unparalleled heights of teenybopper success
4 pages
(further feature below)

THE THRILL OF IT - Starting with a little moonwalk in 1983, Michael Jackson achieved a white-hot fame and global adulation rarely seen before - or since
6 pages
(further feature below)

STRANGE DAYS - "Off to Neverland"
At his fantasy playground in the hills of Santa Barbara county, where the singer entertained gaggles of young kids and older celebrities, the accent was always on excess - and later controversy
3 pages
(further feature below)

THE ACCUSED - In 2003 Michael faced charges. He was found not guilty, but his reputation never fully recovered
2 pages
(further feature below)

FARRAH FAWCETT 1947-2009
She was a Texas bombshell who became a superstar thanks to an unforgettable poster - and a guy named Charlie. But her real-life struggles and courageous fight with cancer proved she was far more than a sex symbol
6 pages