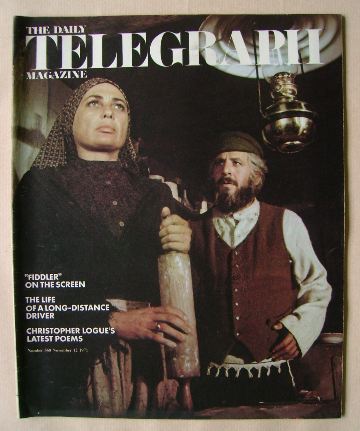 INVADERS OF MARS - Does life exist on Mars? Tomorrow, American scientists hope that this riddle will be solved when their spaceship Mariner 9 is scheduled to go into orbit around the planet after a 22-week journey. Two Russian probes are also expected to reach Mars some time this month. If there is life, what form could it take?
2 pages

TRAVAILS OF A LONG DISTANCE LORRY DRIVER - A 40-ton truck and trailer can make London to Teheran in seven days. But in winter, with the temperature down to minus 15C, and with the inevitable breakdowns and stops it can take 20. Colin Bell describes the long haul across Europe and the rigorous life-style of the men at the wheel
7 pages

RADU LUPU - Radu is Romanian and 26. He is the new wunderkind of the concert platform. His talent is acknowledged by even the most jaded of critics. How has he achieved such success? David Pryce-Jones describes his meteoric career
Three and a half pages

A POEM IS A CARD IS A POEM - Christopher Logue has probably done more than any other modern poet to popularise poetry. He was the pioneer of jazz and poetry sessions, and his poster poems have sold thousands of copies. His latest venture is postcard poetry, illustrated here. Byron Rogers talked to him about his various enterprises and investigated other media exploited by poets
3 pages

THE GENIUS IN THE PATENT OFFICE - To most people Albert Einstein is a shadowy figure, a scientist whose theories somehow changed the world, but whose life largely remains a mystery. What kind of man was he? How did the obscure clerk become a legend? In the first of two articles, Ronald Clark looks at the quirky, humorous man behind the myth
Three and a quarter pages

FIDDLER ON THE ROOF... SCHMALTZ AND SUCCESS - The corporate Jewish memory of life in Eastern Europe has now dwindled to a mere shadow in the subconscious. Yet the Yiddish extravagance of Fiddler on the Roof has packed some 35,000,000 people into theatres in more than 20 countries. The film is to be released next month. Theo Richmond met some of its principal figures and asked them - Jew and Gentile - how they responded to its display of Jewish feeling
Three and three-quarter pages