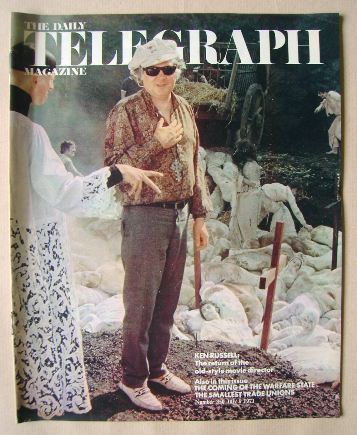 SUMMER COLD - This year a few pioneers will cross the last frontier of tourism 200 miles north of the Arctic Circle to Greenland. Byron Rogers saw the sights at 30° below
Two and a quarter pages

THE WARFARE STATE - The terror of nuclear weapons may so far have prevented a third world war, but the existence of the bomb has given rise to quite a new kind of conflict - the struggle for technological supremacy. Fought on the battlefield of the laboratory, this scientific "war" devours money and manpower at a shattering pace. In the fourth and final of his articles, Robin Clarke examines the frenzy of the arms race
Four and a half pages

THE RIGHT TO BE OUTRAGEOUS - Ken Russell's latest film The Devils promises to be as sensational as his earlier ones. He is very often accused of "making everything up". Russell denies this and claims he sticks closely to the truth, but his bizarre use of fantasy provides an uninhibited counterpoint to the documented facts. Are his very personal films a demand for the artist's right to behave outrageously, should he so desire?
Three and a quarter pages

YOUNG WRITER OF THE YEAR AWARD - Michael McCarthy: third prize winner
One and a half pages

UNITED THEY STAND - Small unions, like the Society of Shoe Rivet and Wire Nail Makers, with all of ten members, rarely make news. But they comprise a sturdy, human trade force. We meet some die-hard members
Three and a half pages