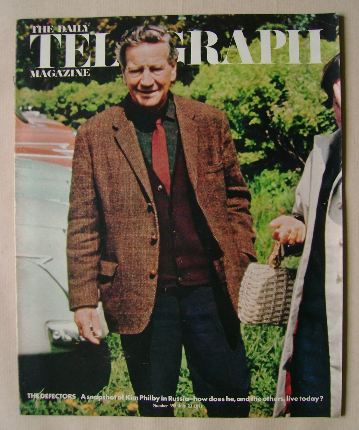 HEYDAY OF THE ATTORNEY - Manson, the Chicago trial, even Perry Mason, have introduced us to the methods and behaviour of American laywers. As 5,000 leave London after a "convention" here, Fenton Bresler examines their different procedures
Two and a half page feature

WHERE THE GRASS IS NOT ALWAYS GREENER - The three favourite refuges for defectors are Moscow, Prague and East Berlin in that order. To most they offer no more than a bare scratching existence. Yet those who have gone over will not admit disillusionment. Is their commitment rather a fear of returning to the Western rat race than a realised ideology?
5 pages

REACHING FOR THE MOON FROM COCO BEACH - Ten miles south of Cape Kennedy lies Coco Beach, dormitory area for the space centre's top scientists and engineers. It is a seaside strip of eyesores, a place apparently without charm or character, but the residents love it with a fervour which could be significant for the whole of America
4 pages

PARIS CALLS ITS BLUFF - The Paris Autumn Collections start again on July 25th. Again they will carry the full impedimenta of the Fashion Corps, Beautiful People and other motley sycophants of haute couture. But does it all add up to anything more than one big media operation upon whose dictates the world waits each season?
4 pages