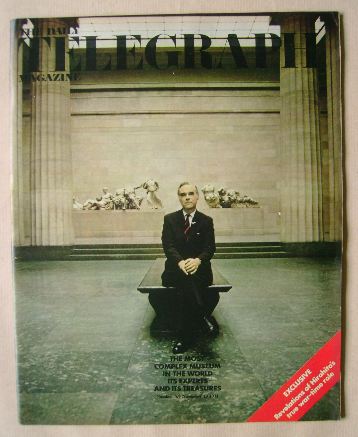 Cover photo of Dr Reynold Higgins (Deputy Keeper of the Greek and Roman Department, in the Duveen Gallery)

SOFT TOYS DO NOT MAKE A NEW MAN - "It is education the tonic rather than education the sedative that really matters." But when 1,800 men are crammed into space planned for 780 - at Strangeways, Manchester, a remedial class for illiterates squeezes into one cell - such aspirations are hard to realise. Colin Bell looks at the problems of using education for rehabilitation in prisons today
Two and a half pages

THE CANKER IN THE CHRYSANTHEMUM - The mystery still surrounding Emperor Hirohito's role in the last war was reflected in the coolness and distrust with which he was received on his recent tour of Western Europe. Was he, in fact, a major war leader - or an innocent, helpless witness of the deeds of his military advisers? Was he involved in planning and condoning the rape of Nanking in 1937, the attack on Pearl Harbour, the atrocities of the war? In a new book, David Bergamini suggests that Hirohito not only knew of the Japanese war plans, but played a major in drafting them. This week we publish exclusively the first of two extracts
Five and a half pages

INSTANT FICTION - Writer Jim Moffatt tosses off novels at the rate of two a month. Current trends provide him with some of his storylines and he gets inspiration from the most ordinary events. The riding crop he is examining gave him an idea for a story. Robert Leigh went to see him
2 pages

TREASURE HOUSE IN BLOOMSBURY - The greatest wealth of history, beauty, oddity and fascination in the country (perhaps anywhere) is to be found in the British Museum. But what goes on behind the scenes? Who works there? How is it run? Clifford Hanley explored, from the rifle club in the basement and the "Private Case", to the science fiction of the research laboratory
Six and a half pages

WAR EFFORT OF A PACIFIST - Einstein - a saintly figure, or a man who had come to terms with his conscience? Ronald Clark concludes his study of the great scientist by examining his involvement in the American war effort and development of nuclear weapons
Two and a half pages