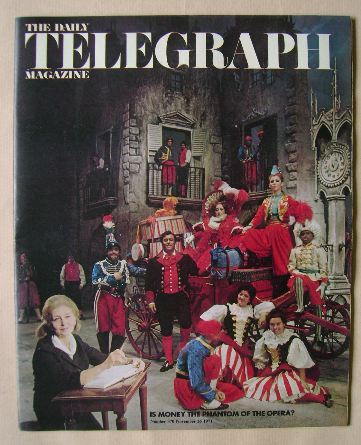 TRAVELLING 500 MILES TO WORK - With high unemployment figures, workers in certain areas of Britain are having to look beyond their home towns for work - even as far afield as the EEC. Through direct-recruiting schemes, or agencies like the Construction Industry Employment Agency in Glasgow, run by the Murphy brothers, some have already gone to Germany, the only member country at present providing jobs for British workers. How have they fared? Can they compete?
Two and a half pages

ABORTION: A PROFITABLE BUSINESS - The Abortion Act, 1967, has now been in operation for three years. It was intended to enable women with suitable grounds to obtain abortions on the NHS. It aimed thereby to get rid of illegal and dangerous "back street" jobs. But terminating unwanted pregnancies has become a very profitable business for all too many in and outside the medical profession. Sally Beauman investigates the workings of the Act and its failures
6 pages

CRISIS AT THE OPERA - Every night the great opera houses of Europe (including Covent Garden) make a loss. Opera is kept alive only by massive subsidy. How much of this esoteric entertainment do we need? And how much can we afford? We take a look at the plight of modern opera
7 pages

A WOMAN OF INFINITE VARIETY - The life and death of Cleopatra are legendary. But what was she really like?
2 page feature

TWILIGHT OF A GOD-KING - The death marches, the concentration camps, the construction of the Burma Railway - Japanese atrocities in the last war are well-recorded. How far was Emperor Hirohito involved? Was he a fanatical leader with ambitions contained only by his advisers, or a necessary, helpless tool in the hands of his warlords? In a second condensed extract from his book, David Bergamini continues his argument that Hirohito was a culpable war leader. The impression of seedy, humbled god-king is, he says, entirely false
5 pages