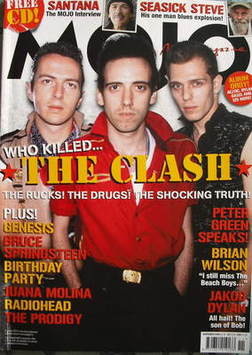 PLEASE NOTE: THE FREE CD WHICH WAS SUPPLIED WITH THIS ISSUE IS NOT INCLUDED

He forsook the "wah!" of Latin rock for Vedic gurus and jazz fusion, before a career rebirth foretold by the archangel Metatro. "My spiritual quest is more important than radio airplay," says Carlos Santana

The making of Combat Rock was a time of chaos. Conflict and class As that sowed the seeds of destruction for punk's last great hope, The Clash. Prior to the release of their 1982 Shea Stadium concert on CD, Matt Snow asks... who killed The Clash?

The son of the greatest songwriter of all time, he's hidden behind The Wallflowers for two decades. Now, with the help of Rick Rubin, he's embarked on a solo folk venture. "I must be insane," admits Jakob Dylan as he steps out of his old man's shadow

Revered by B.B. King, better than Clapton, Peter Green was the inspirational guitarist who formed Fleetwood Mac then swapped his millions for a life in the wilderness. " I think it must have been the LSD," he tells us, "but I'm getting better!"

He's just composed a new song cycle about Los Angeles. He loves making music and he loves his new group but, he tells us, "I miss the Beach Boys"

His hobo days are behind him and he's settled down in Norfolk(!) But has the ramblin' man from Oakland, California still got the blues? We put him to the test