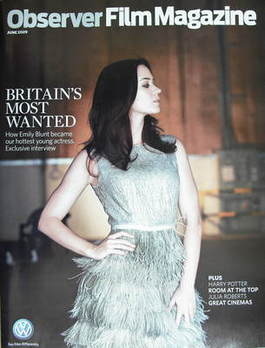 DAVE EGGERS - "Film on my life"

INSIDE THE POTTER MACHINE - Prepare yourselves... the long-awaited sixth film is out next month. Given exclusive behind-the-scenes access to cast and crew, we get to the beating heart of The Half-Blood Prince and discover how Daniel Radcliffe and co have grown into their roles since those early, pre-teen days

THE FILM THAT CHANGED BRITISH CINEMA - 50 years ago, a film above love and class in Yorkshire launched a new wave of 'kitchen sink' drama. We look at the impact and enduring legacy of Room at the Top

BFI ARCHIVE - Vanessa Thorpe on a week in the life of the BFI archive, where she also uncovers some cinematic treasures from the past

In 1994, the star was preparing for the release of four films. The 26-year-old told us about life as a newlywed and the pressures of being the world's highest-paid actress

2 page interview from 1994 along with photo