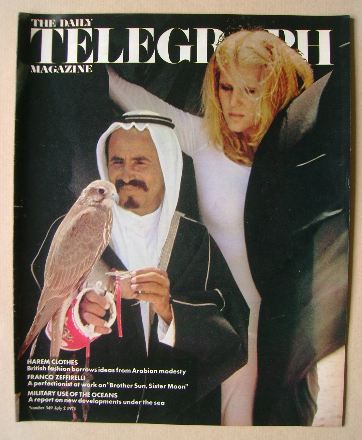 ARMOUR IS NOT ENOUGH - While panelled walls still pull in the public, at a seminar at Beaulieu Lord Montagu told fellow property-owners about other ways of attracting the crowds to the stately homes of Britain
Two and a half pages

FASHION - "Fashion goes into Purdah"
The newest clothes reflect the mood with suggestive gauzes and clinging crepes. We took some to Bahrain, where the women are still heavily veiled and pass secluded lives in the harem
Four and a half page fashion

THE SHOOTING OF ST FRANCIS - An intractable perfectionist, Franco Zeffirelli sets each scene, runs through each actor's part before shooting. He is making his third film, Brother Sun, Sister Moon, about the life of St Francis. It is the first he has attempted to script himself. "With this film I'm like a fatherless child," he told Caroline Moorehead who looks at his rigorous technique. "Where is Daddy Shakespeare?"
Two and three-quarter pages