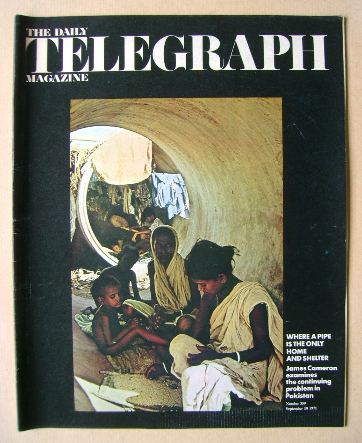 COLD COMFORT COD WAR - Iceland wants to extend her territorial waters. Does this mean another "Cod War"?
One and three-quarter pages

IMAGES WROUGHT FROM DESTRUCTION - When war broke out in 1939, Graham Sutherland was 36, and known mainly for traditional landscape etchings. In 1941, he was made an Official War Artist, but deployed mainly on the home front. The artist has grown older. But the great maturing of his work must be attributed to the grotesque images of destruction he suddenly met during the war. Yet the superb series of sketches he made then has lain disregarded in cardboard boxes, never seen until now. Edwin Mullins introduces these sketches and Graham Sutherland tells him about the experiences that produced them
6 pages

WILDEST OF THE WILD BUNCH - Sam Peckinpah is now recognised as a major director. His latest film, The Straw Dogs, which he is making with Dustin Hoffman, will be seen in January. Dan Yergin sought the truth about the Peckinpah myth amid Cornish mists
Four and a half pages