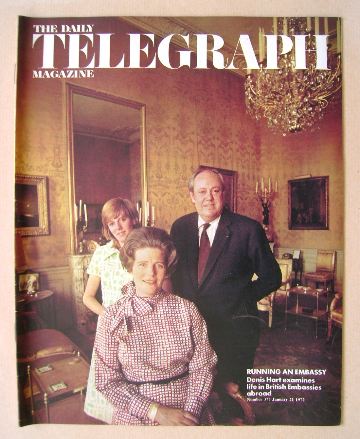 THE WORLD'S BIGGEST DRUM - What have your Spanish castanets and J. Arthur Rank's giant gong got in common? Both come from a chapel in Wales, where a family business has been making percussion instruments for four generations
One and three-quarter pages

A ROUND OF DUTIES AND DAMASK - British Embassy Residences abroad still number among some of the world's loveliest houses. Their upkeep is the responsibility of the Ministry of the Environment. But the choice of decoration falls to the incumbent Ambassadress - furnishings, paintings, sculpture and even bidets. In a life that is enormously busy and exacting, how does she manage? Denis Hart talks to some who have
6 pages

MIXING OILS AND MAKING DOLLARS - On the island of Bali painting has always been as much an integral part of the native life-style as working in the rice paddies. Since the war, Bali has also become a retreat for European artists who have brought with them new methods - and commercial awareness. Balinese primitive art now fetches considerable prices the world over. Alexander Frater describes the reasons behind the boom
3 pages

THE AFRICA DOSSIER - As British influence in Africa declined, so did British secret service activities. The CIA stepped in, sending hundreds of agents to African capitals like Accra, Lagos, Nairobi and Lusaka. Their brief: to buttress "sensitive" states against communism and protect American business interests. E.H. Cookridge continues his exclusive series on the CIA
Three and a half pages