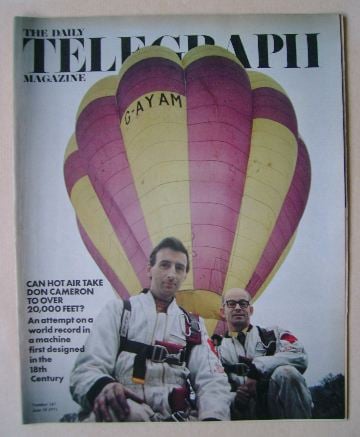 TENNIS: A RICH MAN'S SPORT - A bundle of Texan energy is making itself felt in the tennis world, but not as a player. Lamar Hunt is a businessman; one of his businesses is owning tennis players... most of them
Two and a half pages

THE WAR EXPLOSION - If the progression of future events follows the pattern of the past, we can expect 400 million people to die in war before the year 2000. In the first of four articles on science and the future of the human race, Robin Clarke examines the progress already made towards fulfilling the predictions of history
5 pages

CAN HOT AIR TAKE DON CAMERON TO OVER 20,000 FEET? - Don Cameron hopes to rise to over 28,582 feet and establish a new world record for hot-air ballooning
Four and a half pages

PERIODS OF ARCHITECTURE: LATE VICTORIAN - By John Betjeman
Three and a quarter pages

THE ARTFUL MRS DODGE - From June 23-25 next week, Christie's will auction one of the richest private collections of French furniture and French 18th century art ever assembled. These items, most selected by the fabled Lord Duveen, formerly belonged to Mrs Anna Thompson Dodge, Dundee piano teacher and car maker's widow, who died last June, aged 103, leaving a palace outside Detroit and over $100 million. By Ian Ball
Two and three-quarter page feature