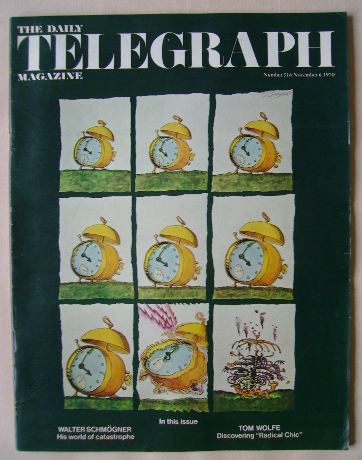 PERIODS OF ARCHITECTURE: EARLY ENGLISH - Acutely pointed arches and slender columns are the marks of the Early English period (1150 to 1250). The engineering problem of roofing a large space in stone produced an aesthetic solution; and larger windows also shed a new light. John Betjeman continues his pilgrimage through our architectural history
Five and a half pages

WALTER SCHMOGNER is a new, young Austrian artist and cartoonist who finds the world amusing, despite the air of disaster and calamity that surrounds his subjects. This is an introduction to his people, his animals and his work
Five and a half pages

FASHION - "Holding a mirror up to nature"
Fake furs. (Photos by Helmut Newton)
Three and a half page fashion

THE DELICIOUS AGONIES OF RADICAL CHIC - When Leonard Bernstein and his wife Felicia invited the lieutenants of the Black Panther Party to their Park Avenue apartment to explain the black militants' cause, their action typified American "Radical Chic" - the attempt by Society to involve itself with the "problem" minorities. But the Bernstein soiree backfired, and Society and the Bernsteins were faced with hostility rather than applause. In the second of our two features on unusual aspects of modern America, Tom Wolfe looks at the confused craze for being "radically chic" - a trend which is, perhaps, not only American, but is reflected in the hypocrisy of elegant slummong everywhere from Bradford to Beirut
14 pages