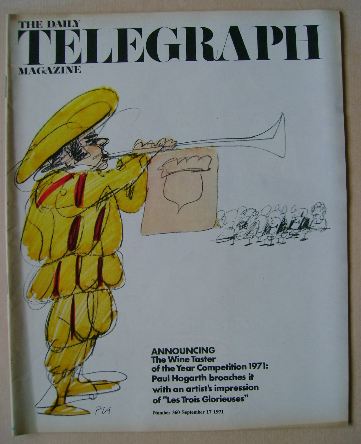 PETER BROOK'S "THEATRICAL YOGHOURT" - In Persia, Peter Brook has been working on a unique production for the Shiraz Festival - an experimental play based on a mythology of imprisonment and written in a language invented by the poet Ted Hughes. Orghast, largely inspired by the story of Prometheus, gives Brook a new dramatic freedom
Two and a half pages

CLOWNS IN A CITY STATE - The only circus training school west of Budapest is Los Muchachos in Bompesta, the brainchild of Spanish priest Father Jesus Silva, and an autonomous city state for 1,000 boys. Despite economic difficulties and lack of official support, the experiment is a success. The boys are hopeful their democratic training may help in a different Spain in the future. The circus is planning to visit Britain soon
Five and a quarter pages

THREE GLORIOUS DAYS OF BURGUNDIAN BACCHANALIA
Every November in Beaune, a three-day wine festival, Les Trois Glorieuses, takes place. Paul Hogarth spent the three glorious days there, feasting, sampling wines, and recording his impressions in drawings and words of the winegrowers' celebrations. A trip to France and Corsida, and a cellar of wine is awaiting the winner of The Daily Telegraph winetasting competition
Four and a half pages

CANNIBALISM ON THE HIGH SEAS - Four men drifted on the open sea in the tropics in a 14ft dinghy without food or water. One had to die in order that three should live. Thus 17-year-old cabin boy, Richard Parker, was killed and eaten. The charge: murder. The plea: necessity. Patrick Marnham reports on an extraordinary case
Four and a half pages