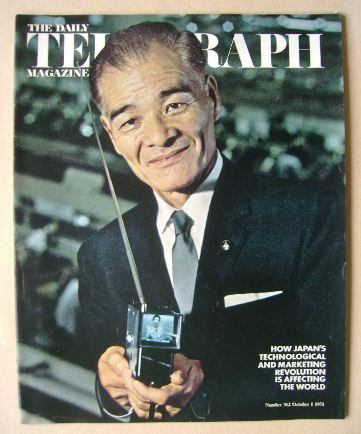 HONOURABLE MEMBERS AND BICYCLISTS - Pedal-power has suddenly hit New York. Each day some 10,000 cyclists cross Central Park alone. But only a few are Benchers. John Pudney meets some members of this free-wheeling set and examines the fast-accelerating bicycle boom
2 pages

WORKING TO CONQUER THE WORLD - Japan has risen to become the world's third industrial power. Her salesmen and technicians pour into every corner of the globe; her products can be bought virtually anywhere. There is no field which Japan is not exploring. The rocket is evidence of her growing space technology; her material successes are the talk of the world. As Japan compiles her ever-growing lists of acievement, we ask: how long can the boom last? How will it affect our economy?
Five and a half pages

THE SALESMEN: HOW DO THEY SUCCEED HERE?
American moves to restrict imports mean that the manufacturing tycoons of Japan are looking on Britain and Europe as increasingly vital markets. Richard Walker explores the Japanese empire which is being steadily built in this country. Can we afford the Japanese sales onslaught?
Two and a half pages

STEVIE SMITH - The idiosyncratic poet died last March. A spate of new books has since given her public acclaim. Kay Dick was one of the last to talk to her in her home at Palmers Green
4 pages

ASTON MARTIN - The second article of a series which asks what virtues those sleek, grand touring cars have which are not shared by the family saloon, looks at Britain's chief contender in this class. And we ask different drivers: would they buy one?
Two and three-quarter pages