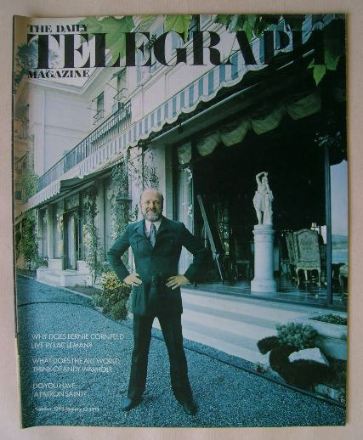 THE WELL BRED FACES OF ANARCHY IN THE USA - Only a few years ago many of them were the charming children of upper class American families; now they are among the fiercest of the world's revolutionary anarchists. Weatherman and Weatherwomen, organised underground in tightly disciplined three-member cells, are the FBI's first concern among youthful subversives. Their bombing strikes against Establishment institutions continue and for the first time young radicals are now on the FBI's "Ten Most Wanted" List. Ian Ball looks at the organisation's brief, turbulent history, its present structure and its hunted leadership
4½ pages

THE BEST ADDRESS IN EUROPE - The Lake of Geneva is just a kidney-shaped expanse of water. But around its banks dwells "the aristocracy of money" - ex-kings, oriental potentates and a world champion racing driver. Is it only the Swiss tax laws that bring them to this unexciting crossroads of Europe?
Featuring Prince Napoleon, Elisabeth Schwarzkopf, Jackie Stewart, Bernie Cornfeld, James Mason, Jaime Ortiz-Patino, Sir Gavin De Beer, Oskar Kokoschka
6 pages

IT'S CLEVER, BUT IS IT ART? - Last week we investigated Andy Warhol the moviemaker. Today, on the eve of an exhibition of his work at the Tate Gallery, four experts in the field of visual arts take a look at Warhol the artist. What do his pictures signify? Will his work endure?
2¾ pages