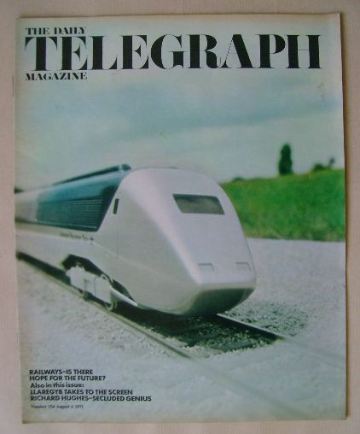 SALESMAN ON THE SIDE OF THE ANGELS - This year the Oxfam shops are expected to net nearly £1m, and their success has encouraged other charities to try High Street trading. Byron Rogers met Joe Mitty, the man who for 22 years has master-minded the Oxfam success
2 pages

THE NEXT TRAIN IS STANDING AT DERBY - British roads are congested; air travel in our small country can often take more time than the distance merits. As passengers face this clogged impasse, the question arises whether railways could provide the solution - if trains were efficient, puntual and comfortable. In Derby BR are developing a new high-speed train: but it will not be ready until 1978, and then, say some, may be inferior to others abroad. Lines are closing, and trains seem to come a poor third to other forms of travel. But could the ideas and standards of railways abroad be introduced here to make train travel more efficient, enjoyable even, again? John Laffin covered 3,000 railway miles in Britain and Europe before preparing this report
5¼ pages

LISTENING TO THE DREAMS OF LLAREGYB - "It is spring, moonless night in the small town, starless and bible-black, the cobblestones silent and the hunched courters'-and-rabbits' wood limping invisible down to the sloeblack, slow, black, crowblack, fishingboat-bobbing sea." Fishguard, Pembrokeshire is the setting for the film of Dylan Thomas's "Under Milk Wood" - A Play for Voices - in which Richard Burton, Elizabeth Taylor and Peter O'Toole have three of the main roles. Denis Hart tells the story behind the shooting of Dylan Thomas's final masterpiece
5¾ pages

"TOLSTOY" IN WALES - Richard Hughes, author of High Wind in Jamaica and Typhoon, strides across the estuary near his secluded house in Wales, his coracle on his bank. For ten years he has been working the second volume of his ambitious trilogy, The Human Predicament. Jon Bradshaw describes the lonely life he has chosen, shunning one world in order to create another
2 pages

PIERS OF THE REALM - The first seaside piers were merely practical landing stages, used mainly by boats. But eventually the holidaymaking taste for inconsequential extravagance decreed a series of pleasure pavilions built over the waves. By John Betjeman
2 pages