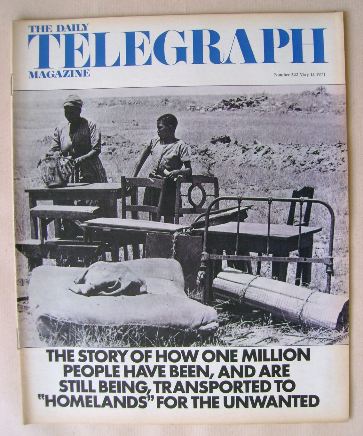 BLACK EXILES IN THE VELD - The armed police in the photograph are evicting black Africans from their homes in Harrismith, Orange Free State. Lorries carrying the Africans thus dispossessed were driven off to a site chosen by the Government. The woman and child pictured sit among their possessions after being removed from their house in an African township in Witwatersrand. Incidents like these are the result of the South African Government's policy of moving the black Africans from their homes and "consolidating" them in "Bantustans" and "homelands" like Limehill in Natal. The ultimate aim is complete elimination of a "chessboard" distribution of black and white. In the next ten years, over half a million Africans in the Eastern Cape alone will have been resettled. Cosmas Desmond, a Franciscan priest has become a crusader the right of the Africans to live on their own land. This is his account of the South African solution to the Black Spots
5¾ pages

STANDING THE WORLD ON ITS HEAD - Enthusiasts are rediscovering the work of a Dutch-American cartoonist who, 68 years ago, developed a newspaper strip whose complexities would tax a computer. Ian Ball joins the search for Gustave Verbeek and the odd method by which he contrived a strip which could be read from top and from bottom. Some modern cartoonists also give us their opinions
3¼ pages

RE-BIRTH OF ANCIENT MONUMENT - Les Halles, the maze of narrow streets that has been Paris's market-place for centuries, is dead. Yet it has never been more full of life. Antique fairs, sex shops, boutiques and even a skting rink have taken the place of fruit and vegetable stalls. And Sean Hignett has found that conservationists seem to be winning their battle against a city authority intent on re-development
5¼ pages

THE SAD DEMISE OF CRENSHAW, APPLEGATE AND PENFOLD - A story by Calvin Trillin
2 pages

...AND MAN REMADE THE FIRMAMENT - Adrian Berry concludes his science series with a report on the most fantastic plan yet - to redesign the Solar System in order to accommodate an expanding civilisation. The scheme involves commandeering thousands of tiny planets or "asteroids" and dismantling the giant planet Jupiter. The inspiration behind it comes from a distinguished Anglo-American scientist, Professor Freeman J. Dyson
3¾ pages