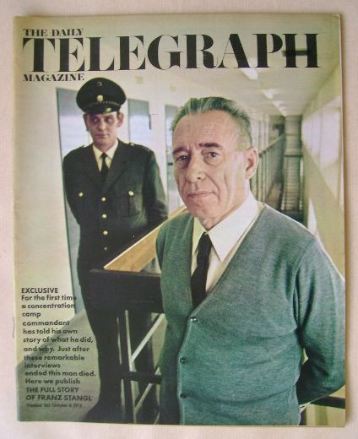 LETTER TO A YOUNG GIRL - Jean Anouilh, whose play Dear Antoine will open in London early next month after a season at Chichester, has written his first full-length article giving advice to young girls who dream of going on the stage
2½ pages

FRANZ STANGL - For the first time a concentration camp commandant has told his own story of what he did, and why. He was Franz Stangl. For ten days, six to seven hours a day, Gitta Sereny was allowed to interview him in a small, bare room near his cell in a Dusseldorf prison. She found he was neither brute nor evil genius, neither madman nor fool. He had been that most dangerous of all figures: a person with competence and ambition, but also with the exploitable weaknesses of the average man. He became and remained a man of dual personality. Did he at last recognise the truth about himself?
12½ pages

PICASSO AT 90 - Picasso as a child was a brilliant observer of the world about him, a merciless chronicler of human foibles, a technical master even at the age of 12. He drew continually from life until, as a young man, he abandoned a naturalistic approach. For three generations his family has carefully preserved the work of his youth; Picasso, 90 this month, has presented it to the Picasso Museum, Barcelona. We publish exclusively a selection of the drawings, and overleaf, Edwin Mullins discusses the value of the gift
4½ pages