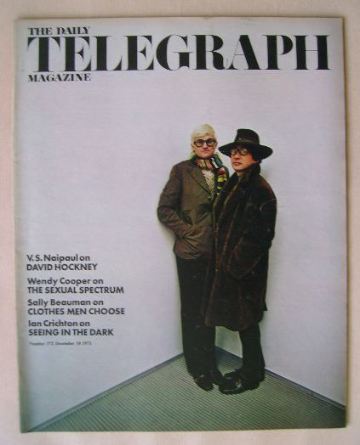 AT THE REINS OF THE WORLD - Scepticism has frequently been voiced about the role of the United Nations. And the appointment of its Secretary-General again raises the question of its effectiveness. How can one man best lead it? Anthony Nutting, former Minister of State for the UN and Leader of the UK Delegation (1954-56), considers the past, and future prospects
2 pages

GENDER IS A MUTABLE POINT - Of all opposites, the most forceful perhaps have been the male and the female. And like all good opposites, they have been mutually attractive. But when the distribution of hormones is upset, the equation breaks down. What happens then? Recent medical and scientific research has established a variety of intersexual states. For the people falling into the intersex bracket, the problems of adapting to "normal" life are immense. Wendy Cooper reports on the sexual spectrum
5½ pages

LIFTING THE COVER OF DARKNESS - The dark is now light enough for modern warfare. A range of instruments has made it possible to see clearly , even on the blackest night, by using magnification of any available light, however faint, and radar, infra-red devices or seismic sensors. But it is not only the military who have benefited from these astonishing developments. Night vision devices are helping the police, search parties, security firms, hospitals and zoologists. How do these instruments work? And how much do they cost?
4 pages

ESCAPE FROM THE PURITAN ETHIC - "I think," says David Hockney, "that everybody should be allowed to escape." His own escape, from the confines of a Bradford childhood, has been almost ostentatiously successful. Painting has taken him over the wall into a wider world. Hockney is not an artist who fulfils himself by starving in a garret. His paintings fetch high prices; he is able to lead a life of considerable material comfort. But with success he has also found serenity. V. S. Naipaul investigates this encouraging combination
4¼ pages