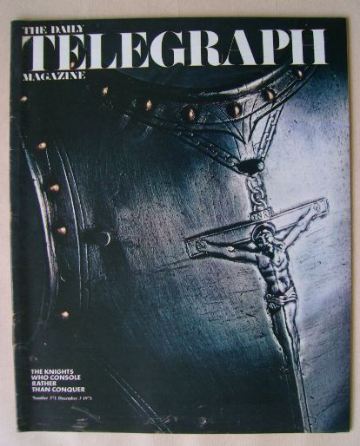 STRETCHING THE SEAT OF OFFICE - Can one man run a whole city? Not just as city manager, but taking the place of the Council, the Mayor and the rest of the city machinery? Since Dublin dissolved its Council, one man, John Garvin, has done this and provided an alternative to normal democratic representation
2 pages

ON A SILVER PLATED SOAPBOX - A new and disrespectful voice can be heard amid the faded rhetoric of French politics. It belongs to Jean-Jacques Servan-Schreiber, now president of the Radical Party. His policies owe something to socialism, something to capitalism. But his methods owe much to America. Sally Beauman joined the circus, and met the ringmaster
4 pages

KNIGHTS CLAD IN SHINING HISTORY - Little short of a thousand years ago the Order of Hospitallers of St John was founded to nurse pilgrims to the Holy Land. But prevention seemed better than cure, and the Order became one of fighting knights. When others had abandoned the Crusades these knights carried the war against the infidel to the sea, first from Rhodes, then from Malta. For centuries they were famous as sailors - under naval commanders like Grand Master Gregorio Carafa. The island of Malta remained inviolate until it fell to Napoleon. But the Order survived even that, and today relieves suffering all over the world. Ernle Bradford describes how history came a full circle
10 pages