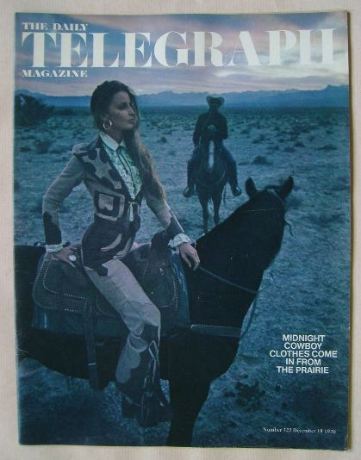 
THE SUCCESS OF SEUSS - High on many Christmas lists will be books by "Dr Seuss". Drusilla Beyfus tells the story of Theodor Seuss Geisel, how he created the "Cat in the Hat", and became part of our nursery folklore
One and a quarter pages

IN A WHIRL OF SPEED OF AND ICE - Last week, British Bobsleigh Team members began limbering up in Germany for the 1971 World Championships. How do you train for the most dangerous winter sport of all? To find out, Richard Cox rode the St Moritz bobrun
4 pages

FASHION - "How the West has won"
Cowboy clothes in their natural setting on the brown ranges. Photos shot in Nevada
5 page fashion

SECRET OF THREE SILENT MEN - An ancient order of silent monks guards the secrets of a drink known all over the modern convivial world. Edward Mullins visited La Grande Chartreuse - the first journalist entrusted with some of these secrets
Three and a half pages

WHEN WILTON'S CAME BACK TO LIFE - Wilton's hall in the East End of London is claimed to be the only original music hall remaining. A trust has been formed to preserve it, and on Boxing Day the BBC are televising a show made there. Sean Day-Lewis was in the audience
One and three-quarter pages