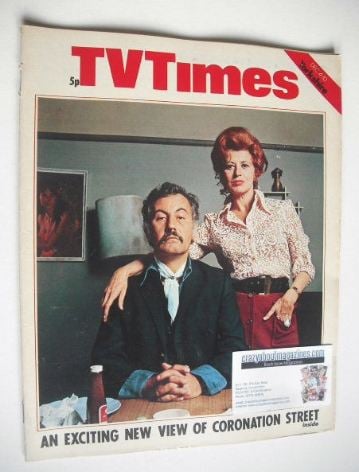 PLAYING IT GENTLY, THE SNOWDON APPROACH
Monday's documentary 'Born to be Small' is the third film from the team of Lord Snowdon and Derek Hart. Here they chat to us about their mutual work, ideas and aims
2 pages

NICOLA PAGETT - "Getting so mucky.... then meeting a King"
1 page

A LIFETIME SPENT TALKING TO A PIECE OF WOOD
We chat to ventriloquists and their dummies: Peter Brought and Archie Andrews, Albert Saveen and Daisy May, Arthur Worsley and Charlie Brown, Neville King and The Old Man, Harold Taylor and Reggie, Len Belmont and Charlie Cherrywood
3 pages

FRANK SINATRA - "1944, a very good year for the singing skeleton"
One and a half page feature

BILLY WRIGHT - "Mr Wright plays on"
As a footballer, he was the pivot around which the England team revolved. But on the way to his success, there was an important goal he missed, which some of his critics called 'a disaster'
1 page

SPIKE MILLIGAN - "Spike and family, fighting for the right to live"
2 pages