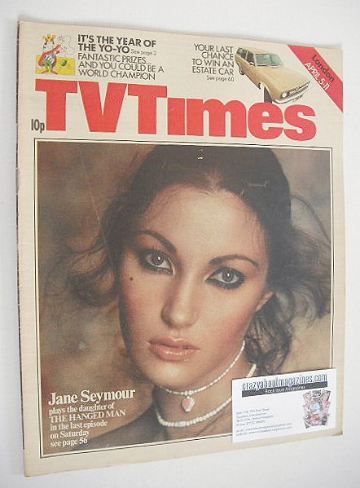 ROBERT HARDY - "A price of players"
An actor must have a choice of roles and not be forced to accept parts just to pay the mortgage. Ask Robert Hardy, who plays Prince Albert in 'Edward the Seventh'
Two and a half pages

"BRITAIN'S FIRST ASTRONAUT MAY GO BY BUS"
This week on ITN, Peter Fairley will reveal details of some of the surprising things due to be carried into space by America's new space bus, the Shuttle. Included among them: women and a British astronaut
1 page feature

"VIOLENCE, FEAR AND SPEED" ... The weapons that make cricket's pacemen great
Here John Arlott looks at this most exciting element in the game - the duel between opening batsman and fast bowler
One and a half pages

JANE SEYMOUR - 'I like to be hugged', says the seductive Jane
2 page fashion feature