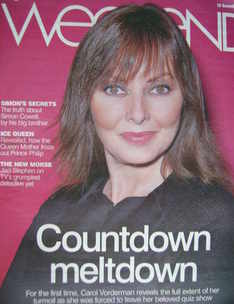 Good condition (crossword has been completed)

CAROL VORDERMAN - For the first time, Carol Vorderman reveals the full toll of being forced out by Channel 4

One and three quarter pages

TONY COWELL - No-one knows Mr X Factor better than his brother Tony Cowell. Here he reveals all about Simon Cowell's rebellious childhood, his strange obsession with mirrors and why he really dumped his girlfriend
One and three quarter pages

WILNELIA FORSYTH - Her husband is under fire for his doddery hosting of Strictly. But Wilnelia Forsyth says he's just as sizzling in the ballroom as he is in the bedroom

One and a half pages

WILL YOUNG on how his premonitions came true, why he's happy to be moody, and his longing to become a dad

THE QUEEN MOTHER The nation adored her, but one man saw a very different face to the Queen Mum. A new documentary reveals her bitter clashes with Prince Philip

1 and a half pages

KAREN HARDY She won Strictly after beating cancer and post-natal depression. But her latest partner drove her to distraction - and now Karen Hardy is on the verge of leaving the show

1 and a third pages

ROBERT CARLYLE He made his name as a psychopath in Trainspotting and is famously intense off screen, too. So why has Robert Carlyle taken up yoga?

LULU "Me and My School Photo"