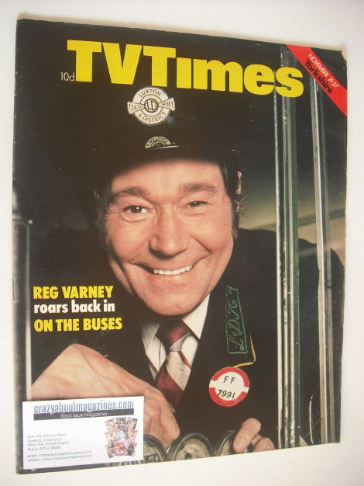 GRACIE FIELDS - Here with photos from her scrapbook, she looks back on her eventful life
3 page black/white photo feature

"HOW TO LIVE TO BE 200" (IT WON'T BE A SECRET MUCH LONGER)
Astronauts in space... men on Mars... Peter Fairley (science editor) believes the day is not far off when such fiction will be reported in the newspapers as fact
One and a half pages

"IT'S ALL VERY WELL PEOPLE SAYING THE AUDIENCE CAN'T KILL YOU, BUT IT CAN..."
Reg Varney says he can't imagine being retired. He works hard to get laughs. But there have been times when he has worked too hard. He worked himself into a heart attack - an occupational hazard of show business
One and a half page feature
(Small interview with: Reg Varney, Sid James, Maurce Woodruff, Jim Couton, Peter Sellers)

COOKERY - "El Nimmo and a Spanish masterpiece"
(1 page cookery, by Kathie Webber)
Recipe for Paella and Sangria (with large colour photo of Derek Nimmo enjoying paella in London at the Martinez Spanish restaurant)