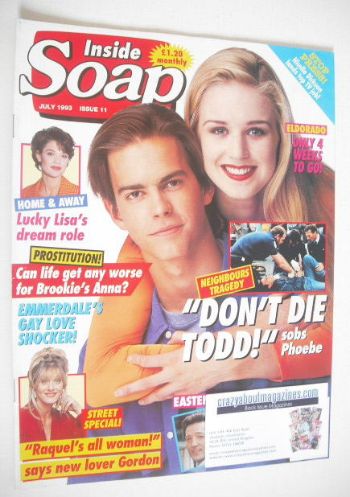 BRIAN HIBBARD - Says goodbye to the Street this month
1 page

CORONATION STREET - Dumped by Wayne, Raquel's plumped for the next best thing - his mate. But does she know what she's let herself in for?
One and a half pages

BILLY BOYLE - "At home feature"
One and a half pages

EMMA DAVIES - "Has Juliette gone too far this time?"
1 page

EASTENDERS - Tricky Dicky says: "I love making Ian's life hell"
One and a half pages

THERESA WONG - "Don't I know you from somewhere?"
1 page

TRISTAN BANCKS - "I was a real smart ass at school!"
half-page

RACHEL HIEW - "In the kitchen with..."
1 page feature (with recipe for Rachel's chicken soup)

GREAT MOMENTS IN SOAP - We go back to 1987 when Hilda Ogden was one of the Street's most famous faces, and when she finally left Weatherfield after 23 years, she was sorely missed
half-page feature

Plus soap storylines and loads more