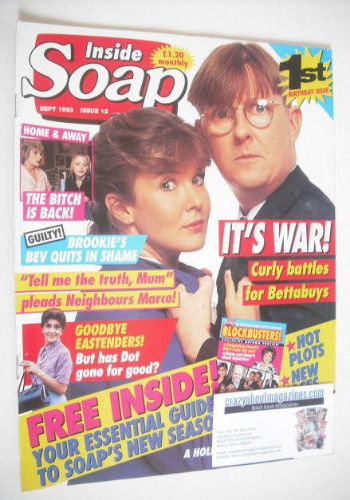 CORONATION STREET - Cover story: "A match made in hell!"
2 pages

EASTENDERS - Dot bows out of EastEnders this month. But can Albert Square survive without her?
One and a half page feature

BILL TREACHER - As Arthur hits the big 5-0, Bill says "I hope Arthur comes to his senses soon"
One and a half pages

BROOKSIDE - Just when Mandy and Beth thought they'd got away with murder, Trevor's sister shows up
1 page

GAVIN KITCHEN - "In the kitchen with..."
1 page feature (plus recipe for Gavin's veggie shepherds pie)

BRIAN REAGAN - What is it about Brookside's Terry Sullivan that makes women want to look after him?
1 page

Plus soap storylines:
Coronation Street:
- Sally's desperate for another baby but Kevin's not so sure
Emmerdale:
- Tears and tantrums when Rachel and Mark throw a party
Neighbours:
- Lou discovers he has supernatural powers