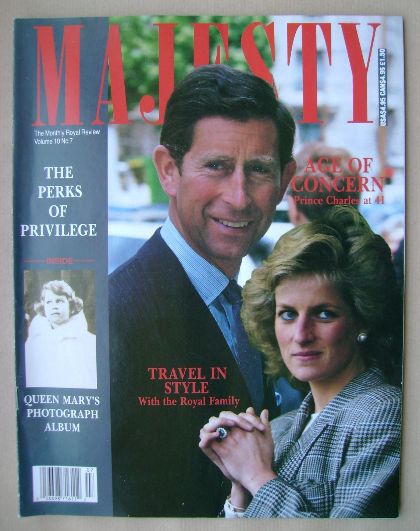 PRINCE CHARLES - Prince Charles is making his mark on the world. Not only is he confident enough to criticise architects and politicians, but he is now implementing his own ideas on a practical level with the creation of a national army of youth volunteers. To mark Charles' 41st birthday, Christopher Wilson charts the Prince of Wales' controversial career
6 pages

CASTLES IN THE AIR - The Queen spends her year in some of the most beautiful castles and houses in the country. Steeped in royal history, these magnificent buildings are jewels in the British crown
7 pages

PRINCESS ANNE - Whether it's her work for charity or the state of her marriage, Princess Anne is always at the centre of media attention. Brian Hoey goes behind the speculation to reveal the true character of the Princess Royal
6 pages

QUEEN MARY'S ALBUM - Earlier this year Christopher Warwick was given a unique opportunity to look through Queen Mary's photograph albums. Stored at the Royal Archives in Windsor, this collection of informal pictures provides an intimate record of royal family life. From holidays in Scotland to State occasions, the photographs form a detailed record of every important event in Queen Mary's life
7 pages

QUEEN MARGRETHE II - The Queen of Denmark is an intelligent woman with a very independent spirit. Although she fulfils all of her demanding royal duties, she has also found time to pursue her own interests
4 pages

ON TOUR WITH THE ROYAL FAMILY - The royal family are always on the move. Whether it's a cruise through the Western Isles or a prestigious trip abroad, they can rely on an army of experts to get them to their destination on time. Unity Hall and Ingrid Seward take a look at the people responsible for keeping the royals on the road
6 pages

BRITAIN AT WAR - The Second World War tested the courage and resolve of the whole country. The royal family played a vital part in maintaining the nation's morale at such a testing time. Although they had not been trained for their challenging task, Philip Wrack reveals that the King and Queen made a unique contribution to the war effort
4 pages

GRACE KELLY - Theo Aronson describes how, after her wedding to Prince Rainier, Grace worked hard at her new role as Princess of Monaco. Whatever sceptics thought on her arrival in the Principality, by the time of her tragic death in 1982 Princess Grace had made an enduring contribution to the reputation of her adopted country
4 pages