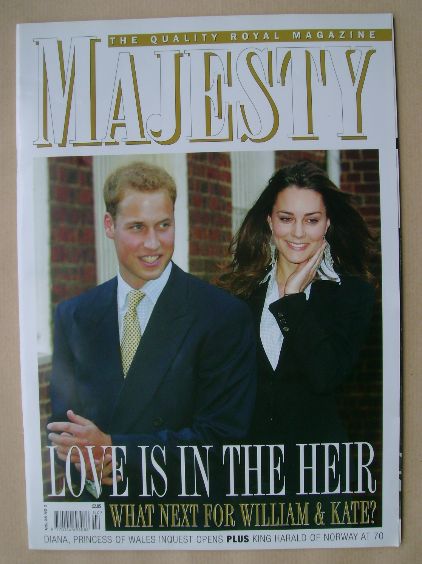 WILL THEY, WON'T THEY? - Are Prince William and Kate Middleton planning to tie the knot?
6 pages

DIANA: THE WHOLE TRUTH - There was no plot to murder Princess Diana and Dodi Fayed and no cover-up afterwards, an official report has concluded. As Caroline Davies explains, the 872-page document categorically demolished one conspiracy theory after another
8 pages

THE FORGOTTEN PRINCE - When Frederick, Prince of Wales finally set foot in England a few weeks before his 22nd birthday, initial impressions from the public and from court were favourable: Lady Bristol described him as 'the most agreeable young man it is possible to imagine'. Sadly his parents had a very different opinion of him, as Susanne Groom reveals
5 pages

REASONS TO BE CHEERFUL - It seems likely that Norway will be en fete this year, as both King Harald and Queen Sonja are about to celebrate their 70th birthdays. Coryne Hall looks back over their lives
6 pages