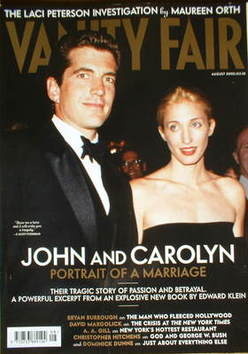 SECRETS AND LIES In an excerpt from his new book, Edward Klein explores the conflicts - over starting a family, George magazine, and life in the spotlight - that drove Kennedy and Bessette apart, despite interventions by a couple's therapist and, fatally, Carolyn's sister Lauren

What did the social X-rays gathered round the Temple of Dendur and the rubber-dressed denizens of the downtown club culture have in common? Both defined a decade of New York nightlife, and both submitted willingly to the discreetly knowing camera of Patrick McMullan. Alongside photos from McMullan's forthcoming book, So80s, we reminisce with the lens of the party

- Grace Jones and Dolph Lundgren at the Palladium, 1985 (full page)