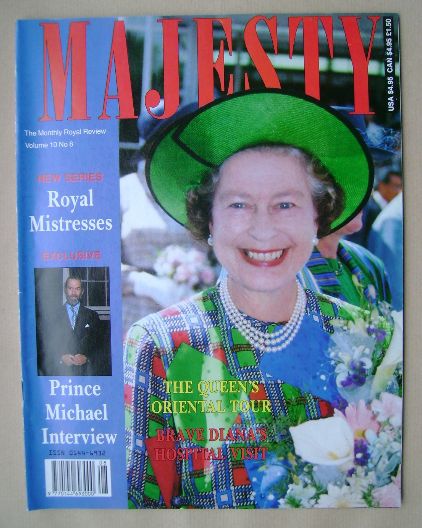 THE QUEEN IN THE FAR EAST - As they travelled from Singapore to the Commonwealth Conference in Malaysia, the Queen and Prince Philip were surrounded by the sights and sounds of the mysterious East. Their journey turned into one of the most colourful royal tours of the decade, as Edward Adams reports
10 pages

PRINCE MICHAEL - Prince Michael has taken a lifelong interest in motoring. Having started driving when he was a child, the Prince has become an accomplished rally driver and a keen advocate of road safety. In an exclusive interview for Majesty, Prince Michael talked to James McLintock about his abiding love of cars
3 pages

CHILDHOOD - Brought up in the traditional manner with nannies, a governess and little contact with the outside world, royal children used to be confined to the nursery quarters and seldom saw their parents. The Queen, however, was determined from the start to bring up her children as normally as possible. Ingrid Seward and Unity Hall take a look behind the door of the royal nursery
6 pages

ROYAL MISTRESSES - Royal mistresses have always been accepted as a part of court life. Eager to trade on their beauty and wit, courtesans openly competed for the ultimate prize: the King's bed. In the first part of a new series, Mark Alexander looks at their influences and their lifestyles
4 pages

MARINA OGILVY - Marina Ogilvy has plunged her family into crisis. Douglas Keay assesses the importance of her recent revelations in the press
4 pages

KING CARL GUSTAF - The King of Sweden faces a daunting challenge. He reigns over the most democratic nation in Europe and has the least power of any contemporary sovereign. But despite these restrictions, the Swedish monarchy is thriving
4 pages