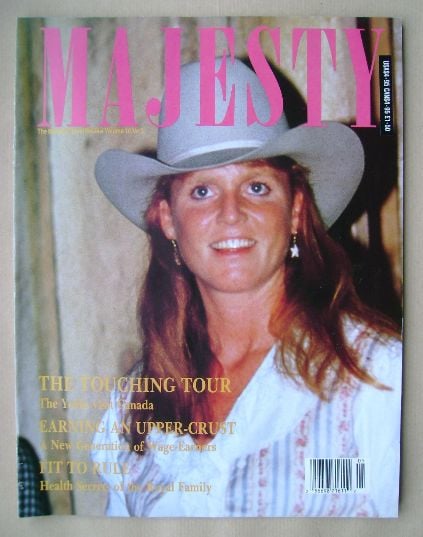 HATS OFF TO THE YORKS - The Duke and Duchess of York used their tour of Canada to show the world that their romance is still very much alive. They celebrated their third wedding anniversary during the visit and were often seen holding hands in public. Shelley Page of the Toronto Star reports on Canada's favourite royal couple
8 pages

HEALTHY LIVING - The royal family are famous for their good health. Despite their demanding schedules they manage to stay in peak condition. Judy Wade reports on the secrets of the robust royals
6 pages

EDUCATING ROYAL CHILDREN - Choosing an education for members of the royal family has never been easy. But now, in an age of security risks and overwhelming media scrutiny, it has become harder than ever to prepare royal children for their role in life. Nicholas Courtney has been looking at the options
6 pages

EARNING AN UPPER-CRUST - Times are changing for today's young royals. No longer held back by Court conventions, they are starting to make their own way in the world. Valerie Garner takes a look at the new breed of royal wage-earner
5 pages

QUEEN BEATRIX - Desite her unusual childhood, Queen Beatrix has grown into one of Europe's most respected monarchs. Theo Aronson reveals the hidden strengths of the thoroughly modern Queen of the Netherlands
4 pages

WATCHING THE DETECTIVES - Wherever they go, the royal family are under threat. A drive to Buckingham Palace or a walkabout in a foreign country can make them a target for a sniper's bullet. Brian Hoey looks at the men who are responsible for protecting the royals against this unseen danger
6 pages

PLANES, TRAINS & AUTOMOBILES - When the royal family travel, they go in style. Whether it's an official engagement or an overseas tour, the royals are always on the move
4 pages

WALLIS SIMPSON - The relationship between Wallis Simpson and Edward VIII plunged the British monarchy into an unprecedented constitutional crisis. Illustrated by many photographs that have never been seen before, Theo Aronson gives a unique account of the most dramatic marriage of the century
6 pages