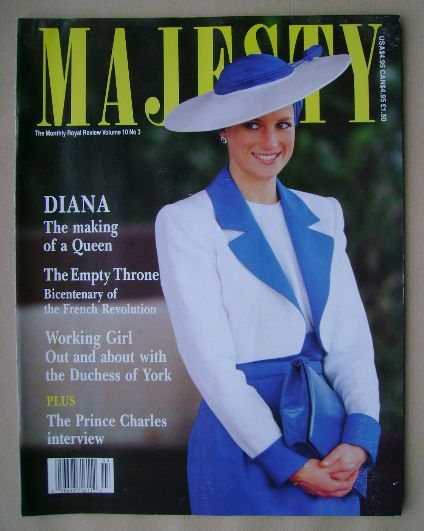 Good condition - some rippling to pages

PRINCESS DIANA - A Queen in the making
The Princess of Wales has transformed herself from a shy bride into a confident public figure. The transition has not been easy, but the results have been spectacular. To mark the eighth anniversary of her fairy-tale wedding in St Paul's Cathedral, Christopher Wilson charts Diana's royal career
6 pages

THE QUEEN - Royal visit to the Channel Islands
6 pages

IN THE SHADOW OF THE GUILLOTINE - Two hundred years ago France was in turmoil. A new order was emerging out of the chaos and an old life-style was fading away. Marc Alexander reports on the victims of the French Revolution
4 pages

PRETENDERS TO THE FRENCH THRONE - Although the French Revolution took place two centuries ago, the effects are still being felt by today's nobility. There are several contenders to the defunct French throne. Stella David considers the validity of their claims
4 pages

FINALLY LAID TO REST? - The fate of the Russian Imperial family has always been shrouded in mystery. The subject has recently created more controversy with a claim by the Russian Government that the remains of the family group have finally been recovered. Harold Brooks-Baker assesses the evidence
2 pages

PEGGY GREEN - On the surface, the match between Peggy Green and Prince Viggo of Denmark was no different to other alliances between rich American heiresses and impoverished European aristocrats. But their relationship was to develop into something special
4 pages