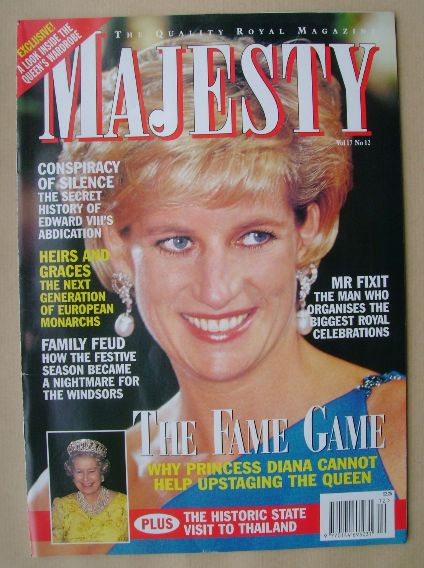 THE GOLDEN TOUR - The Queen's tour of Thailand was her first visit to the country since 1972. Timed to coincide with King Bhumibol's golden jubilee, it was one of the most colourful of recent State Visits
6 pages

BETTER BY DESIGN - The Queen's tour of Thailand gave Jon Moore, who is the Design Director at the House of Hardy Amies, a chance to create a whole new wardrobe, as Michael Tallboys reports
5 pages

PRINCESS DIANA - Diana was given an enthusiastic reception during her trip to Australia, her first to the country since 1985
5 pages

A CONSPIRACY OF SILENCE - Sixty years ago, King Edward VIII abdicated the British Throne. It was a decision which came as a great shock even to his closest family
5 pages

THE BIG CHILL - The Queen has always enjoyed having her family around her at Christmas. But in recent years, the festive spirit has turned decidedly chilly
4 pages