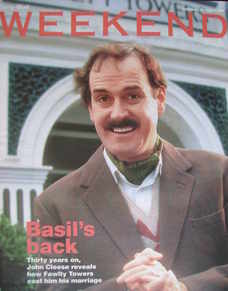 JOHN CLEESE Thirty years on, Fawlty Towers is popular as ever - but success came at price. As the cast get back together, they recall the pleasure and pain of filming, and the show's star, John Cleese, tells us why Basil Fawlty cost him his marriage

DEBORAH MOOREWhatever you do, don't call Deborah Moore a Bond girl, though her father Roger was the legendary 007. Not only, she says, does she not have the chest for the part, but she won't cash in on his millions, preferring the bus to limos. And nightlife? Her favourite pastime is an evening in front of the TV, just like her once party-loving mother Luisa
1 and three quarter pages

JOAN RIVERS As acid-tongued as ever and in the UK for a stand-up tour, Joan Rivers tells us how her love of painting made her two surprising royal friends - Charles and Camilla - but she resisted the temptation to take a doggy bag from their wedding

ROB LOWE In the 1980s Rob Lowe was the world's biggest movie heart-throb. But then he fell spectacularly from grace. Now, as he makes his West End debut, he tells us how he got a second chance at stardom

COMPING Cash, luxury holidays, cars... all these culd be yours in the strange world of 'comping' - the potentially addictive hobby of entering competitions and game shows. We meet three people who are hooked on prizes