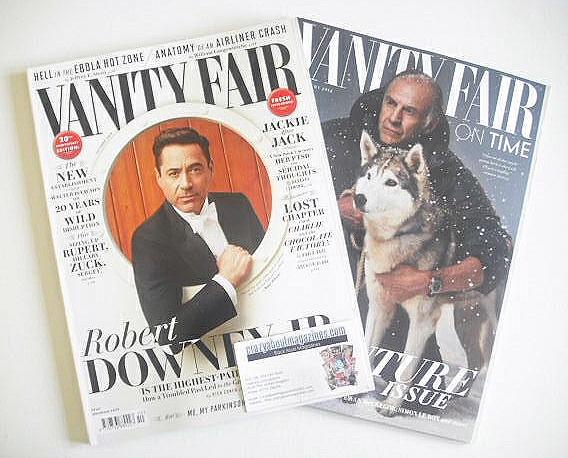 "THE ENDLESS HOLIDAY" - As soon as the commercial jet travel became widespread in the 1950s, the international elite built a lifestyle around it, flying from one glamorous destination to another. We take a look at a bygone era
10 pages

THE NEW ESTABLISHMENT - Alongside this year's list, we examine what made 1994 a turning point, the key innovations that followed, and where the Digital Revolution is headed
18 pages

ROBERT DOWNEY JR - "The Ride Of His Life"
7 pages

"WILLY WONKA'S HOTTEST ITEM" - A half-century after the publication of Charlie and the Chocolate Factory, in a never-before-seen chapter from an early draft which its author, Roald Dahl, later omitted, Willy Wonka watches as three kids try a dangerous new treat
2 pages

"THE HUMAN FACTOR" - The 2009 crash of Air France Flight 447 remains so perplexing and significant. We explore how a series of small errors turned a state-of-the-art cockpit into a death trap
13 page feature

"THE WINTER OF HER DESPAIR" - An adaptation from a new biography of Jacqueline Kennedy Onassis chronicles the year that followed J.F.K.'s assassination, as his widow struggled with pos-traumatic stress disorder
12 pages