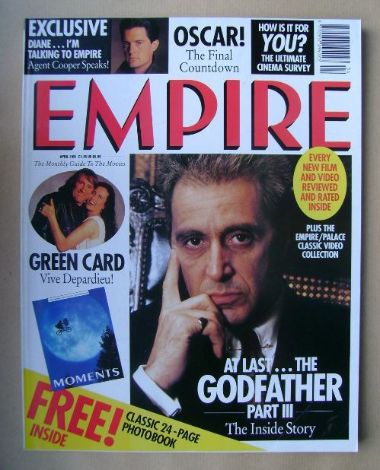 Good condition - some light wear and creasing to front cover

The 24-page photo book is NOT included

MIKE LEIGH - Mike Leigh explains to a crowded room just how he makes his remarkable improvisational bittersweet movies. Chris Heath grabs a seat at the back...

PENNY MARSHALL - After the chuckles of Big, Penny Marshall now tackles the serious business of hospital drama with heavyweights Robert DeNiro and Robin Williams in the Oscar-nominated Awakenings. Sean Mitchell catches up with her in Hollywood...

MICHAEL CIMINO - He made The Deer Hunter and everybody loved him. Then he made Heaven's Gate and he couldn't get arrested. "Behind every legend there is a human being," cautions Michael Cimino to a bemused Philip Thomas...

THE GODFATHER PART III - Nearly 20 years after he first took charge of a small project called The Godfather, Francis Ford Coppola now returns with the third instalment in the epic tale of the famiglia Corleone. Anne Thompson talks to Coppola and his leading man Al Pacino about the making of the year's most eagerly awaited movie